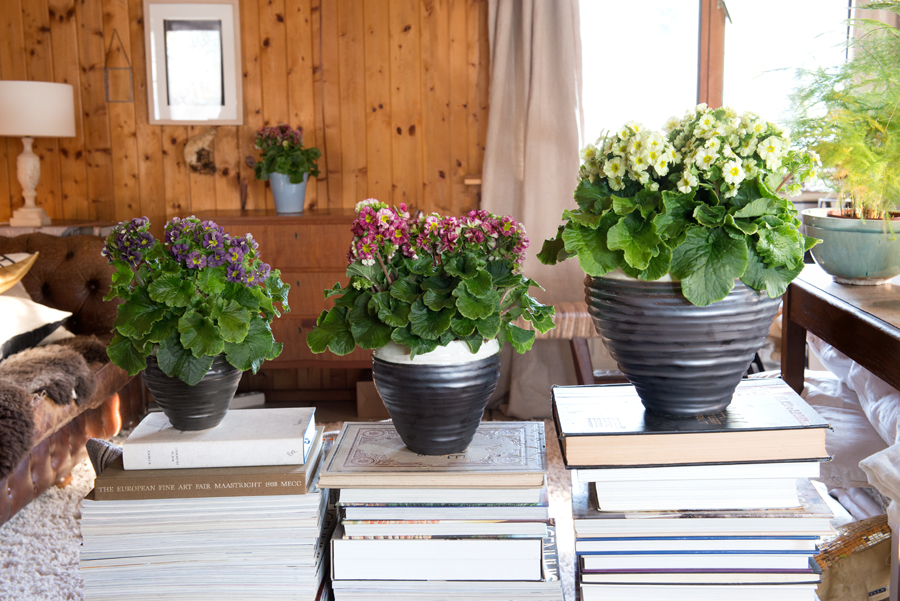 A few years ago I saw her outside, on the patio at work. There were three of them in a low planter. And I had to look twice because I didn’t recognise the plants, not yet, at least. But they were so beautiful!

They reminded me of some traditional hydrangeas, of which the blooms become more beautiful as they age. That is a matter of taste, of course, but I love that rustic, weathered look. So I went off to ask our breeder and he informed me that this was a Primula obconica, but a very special member of the family.Unusual, different, distinctive, so very unique…

I just fell in love with it!

This magnificent plant was still in the middle of the breeding process and so, at the time, it wasn’t in production. But because I liked it so much, I was allowed to take two plants home. According to our breeder they would do well outside on the patio. “They’re quite tough plants”, he said. They continued to flower for weeks, and months. As the weeks progressed the colours became more beautiful, more intense, deeper, a bit ‘rusty’. I really admired them…

Last year this special variety was grown in limited numbers and tested in the market. It appeared that I wasn’t the only one who was so excited by the Pricanto, as it is now called. So in two weeks’ time, the first plants will be coming from the grower, this time in larger numbers. The first colour will be ‘lime’, the other two colours will be available about two weeks later.

I’m so looking forward to this, because one thing is certain, I’ll be getting these again. Only I’m not sure yet whether I’ll put them indoors or outside, both are possible, provided we don’t have any frost. And the Pricanto with its vintage appearance fits in so well with the autumn colours in the garden. I think I’ll make an arrangement with matching accessories on the garden table, or something like that. And then I’ll have one inside as well, on the cast iron stove, which we don’t light anyway.

Yes, that’s what I’ll do, even planning where to put these plants is exciting.